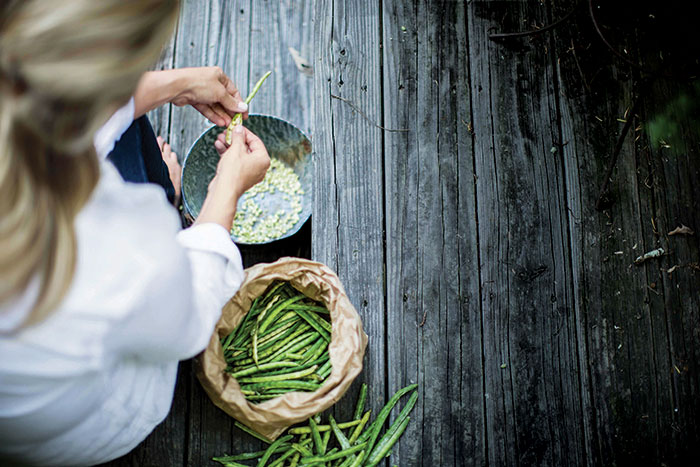 I fried over 80 chickens in my backyard over the course of the snowiest winter in decades in Georgia,and on into the steaming hot summer months. I cut up chicken by hand nearly daily. Testing recipes for my fifth cookbook, Fried Chicken, was a physical challenge like I had never experienced. By the time I finished, no wonder my hands hurt. My pain started that spring, in 2014, when my hands would be so sore and cramped by the time I went to bed, I would tuck them under my pillow to encourage them to flatten out and rest.

That year, my 8-year-old son and I would throw the football in the yard a few afternoons a week while the weather was warming. We gradually went from a leather ball to a toddler’s foam football because the impact of the ball on my hands was so uncomfortable.

My right hand was mainly affected and I truly thought I had just overdone it in the kitchen. I didn’t take my discomfort too seriously until my left hand began to hurt. Within a couple of months, the joints on my big toe on my right foot started aching. My hands began to be stiff for a while after I woke up each morning. “Can I have a braid?” or “I need help with my buttons” from my daughter before school became dreaded questions to hear. I went to my general physician and learned that when pain is mirrored on both sides of the body, it raises some red flags. She drew blood and I waited.

Her nurse called when I was with my children at a local indoor trampoline facility where I had promised I would take them all summer. I sat there in that loud and pretty unpleasant atmosphere (for adults) and first heard the words that I needed to see a rheumatologist. It had been an extremely long time since I was in a public place trying not to cry. From the first ring of that call, that changed.

After several weeks of waiting for my appointment, I met my husband at the local rheumatologist’s office and got there just a few minutes before he did. As I sat in the waiting room, the youngest person by at least 30 years, I was in disbelief. I heard the words rheumatoid arthritis several times that day, but a few tests had to be run to start to narrow the answer down to one we could treat. I needed to let go of more blood than I thought must have been flowing in my veins. I then left with prednisone as the icing on this ironic cake.

I managed to get out of the office and into the car with my sunglasses on, my lips quivering. When the car door closed, I wept in the way that only loss brings about. All I could think was, “If my hands won’t work, I can’t work. I’ve loved to cook nearly my entire life. It’s my income, my hobby, my identity, and the way I feed my family.”

I’d seen elderly women with disfigured hands from rheumatoid arthritis and always felt so sorry for them. My hands are in every cookbook I’ve written and are often in close-ups on camera. I’ve served as the hand model for television commercials you’ve probably seen. I truly kept thinking I would wake up one morning and realize I dreamed it all.

After much prayer and a lot of time to wrap my brain and determination around my diagnosis, I’m now ready and relieved to talk about it and share my journey. It’s one that’s just beginning, but at least now I have answers to so many of the physical issues I’ve had over the years. Since that first doctor’s appointment, I’ve written my sixth book, The Southern Vegetable Book, and my work and my life in the kitchen are continuing in full swing. Rheumatoid arthritis is going to be with me for the rest of my life. But, I’m determined my ability to cook anything I want will as well.

All photos by Iain Bagwell from The Southern Vegetable Book by Rebecca Lang (Oxmoor House, 2016).